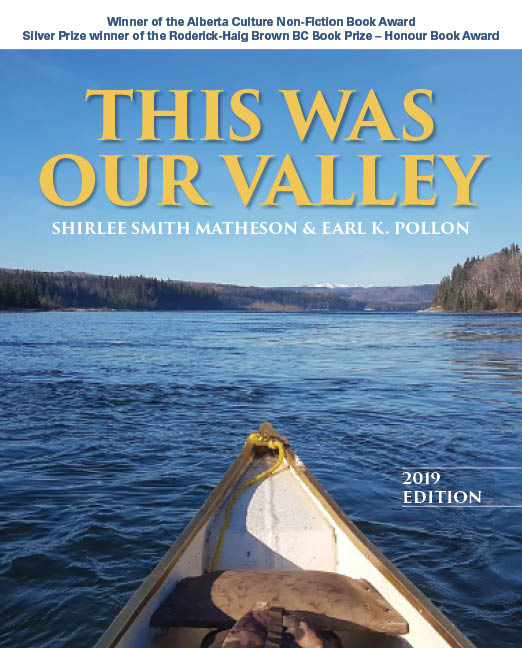 This Was Our Valley was a phenomenal success when first released in 1989, winning the Alberta Culture Nonfiction prize as well as the Silver medal for the Roderick-Haig Brown BC Books award.

This Was Our Valley brought to light the changes wrought by the W.A.C. Bennett Dam that went online in 1967, from fluctuating water flow-levels to continued erosion of the banks, loss of forestry, damage to fish and wildlife habitats – effects that continue to be experienced.

A second dam, Peace Canyon, built 16 miles downstream of the Bennett Dam, went online in 1980. The 2003 edition of This Was Our Valley detailed this dam’s construction.

With the announcement that a third dam, called Site C, would be built on the Peace River near Fort St. John, Shirlee Smith Matheson began work on this edition of This Was Our Valley. Wholly updated and redesigned, this new edition registers the voices that demand to be heard. Some are for the project, some against. This book tries to bear witness to all these voices.

Shirlee Smith Matheson’s 21 published books include adult nonfiction and young adult novels. She is an alumnus of Banff Centre for Arts and Creativity, and a member of The Writers Union of Canada and The Writers Guild of Alberta.

Shirlee and her husband Bill Matheson (born in Peace River, Alberta) arrived in Hudson`s Hope, BC, in 1965, where Bill found employment as a surveyor on the W.A.C. Bennett Dam. Shirlee initially worked for the District of Hudson`s Hope where she met many of the old-timers whose stories are included in this book. Shirlee and Earl Pollon worked on a number of literary projects, topping off their collaboration with This Was Our Valley. Later, both Shirlee and Bill were employed on construction of the Peace Canyon Dam. History continued to dominate Shirlee`s interests after relocating to Calgary, Alberta, through employment at The Historical Society of Alberta, and later The Aero Space Museum Association of Calgary (The Hangar Flight Museum). Her most recent project was Historian for Calgary International Airport.

Earl Kitchener Pollon (1916-1992) came to the Peace River area in 1931, along with his father Jack, brother Art, and sister Phyllis. Earl made his living by hunting, trapping, dredging gold, and operating a lime kiln and a sawmill. He married “his river girl“ Bonnie Goodvin in 1939, and they had four children, Harley, Pat, Carolyn and William. Through his presidency of the local Board of Trade, Earl spearheaded building a road from Chetwynd to Hudson`s Hope, and escorted then-BC Premier W.A.C. Bennett to Portage Canyon, the potential site for a dam that would carry the premier`s name. Writing was Earl`s true passion. He founded a local newspaper, Hudson`s Hope Power News, and later wrote a historical essay titled “Dinosaurs to Dynamos“ detailing the dramatic successional changes the Peace River valley had experienced over the eons. His poetry collection, titled Beneath These Waters, sold several thousand copies. Earl`s legacy continues with This Was Our Valley.