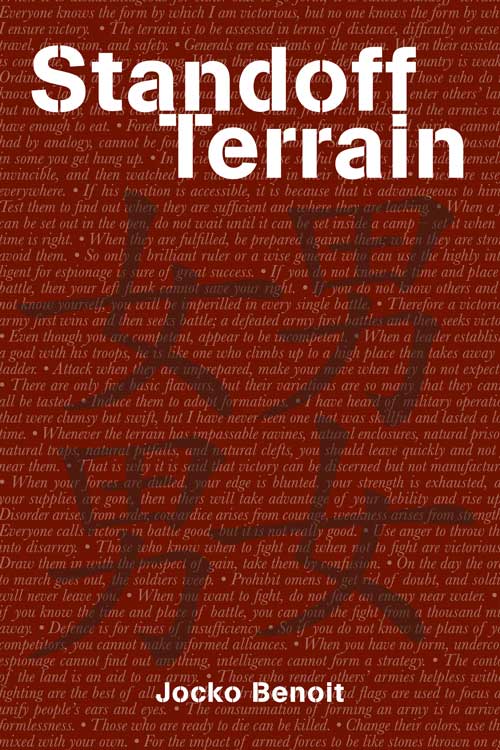 Standoff Terrain takes its inspiration from Sun Tzu’s The Art of War. It is a book of love poems for losers, and since almost everybody has lost at love… well, this book is probably for you. In the end, these poems are about how power – and lack of power – affect who and why we love.

Jocko Benoit was born in Montreal and raised in Cape Breton, and explored the rest of Canada one university at a time until arriving in Edmonton, where he lived as a poetic marauder with the Stroll of Poets. He has written one collection of poetry, An Anarchist Dream, and his poems have appeared in magazines in Canada, the U.S., England and Australia. His stories have appeared inOn Spec and Tesseracts. His screenplays have been shortlisted in competitions in Canada and the U.S. He divides his time between Calgary and Washington, DC.

Reading Benoit is like reading a more erudite version of the U.S. barfly-poet Charles Bukowski (1920-94). There’s the same tone of Eros-weariness, but it is more elegantly expressed…. Anyone who has ever argued with a lover should appreciate Benoit’s verses.

A guy looks for love in all the wrong places, but comes up with all the right lines. What happens when Sun Tzu’s The Art of War meets the Indian erotic-religious text The Kama Sutra? Well, you get philosophical verse that’s fun, frank, and funky.

In these fresh, candid poems, Jocko Benoit takes the high ideals of romance down to the streets. The republic of love is one hell of a battlefield, in Benoit’s poems, but there’s laughter here, too – Archie Bunker reading the Marquis de Sade is surely a “first” in Canadian poetry. And don’t let Benoit’s “loser-in-love” persona fool you – he doesn’t wallow in self-pity. Rather, he’s a wistfully humble student of the world, always willing to jump back into the pool even when he’s hit bottom. A collection of admirable spirit and craft.

It’s hard to imagine a new twist on the dating game, but Standoff Terrain offers boy-meets-girl as a war game. Conducted to the accompaniment of pithy sayings from Sun Tzu’s The Art of War, Benoit’s poems cover all the hope and disappointment, the explorations of compatibility and its absence, involved in the militant pursuit of love. As Benoit’s would-be lovers attempt “to decide between love and / Independence”, they encounter on the one hand practitioners of S & M or an emotional scorched earth policy, but on the other hand also stumble upon surprisingly tender moments. Benoit’s wit and wry perspective keep the whole collection bubbling. The Art of War subtly reminds us that affairs of the heart, like affairs of the sword, have been a quintessential part of being human for eons. Benoit’s stunning achievement is to make it fresh one more time.

By Bob StallworthyImpact Statement is a book of transitions.Transitions that are brought about by a catastrophic health situation. Transitions in life brought on by facing the potential for death and dying to happen at any time; being desperate enough to ask for help...
Read More

A Brush With Depth: The Art of Rick Sealock

By Rick Sealock and Christina VesterProduction details are not yet finalized, so the above information may change. Rick Sealock has been creating wild and wacky illustrations for clients as varied as Rolling Stone, Texas Monthly, The Washington Post, Natural Health...
Read More

By Tyler B. PerryAnyone who has been through school in the past half-century has experienced poetry in the form of the multiple-choice reading comprehension test. Tyler Perry’s latest collection engages in dialogic, deconstructive play with this familiar format, using...

By Lisa RichterNautilus and Bone chronicles the life and work of the radical, passionate Russian-Jewish American poet Anna Margolin on her path toward self-determination. Blending myth, surrealism, historical fact and fiction, this collection of persona poems brings...

By Joan ShillingtonJoan Shillington's third poetry collection, Let This Lake Remember … explores the loss of childhood innocence and fragility of life. From glorious moments to a tragic accident these poems reveal, through landscape influences, how memory is...